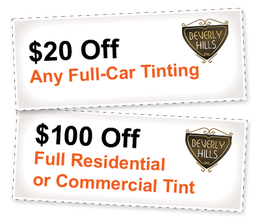 Fort Myers, FL -- October 21, 2011 -- Beverly Hills Window Tinting & Treatments, has recently entered into an agreement with Infiniti of Fort Myers to install paint protection film and window film on all of their vehicles. Beginning September 1, 2011, Beverly Hills Window Tinting will provide auto window tinting and a clear bra for vehicles, available for anyone who purchases a new vehicle at Infiniti of Fort Myers.

"We are very excited to work together with Infiniti to ensure their customers are provided with superior paint and sun protection" said Chris Russo, owner of Beverly Hills Window Tinting & Treatments.

Auto window tinting in Fort Myers is practically considered an essential add on to a new vehicle, as a barrier from the harsh sun that is present throughout most of the year. This type of tinting protects the car's interior from fading and damage due to the sun, protects passengers from harsh UV rays, and keeps the inside of the vehicle cooler during the months of grueling heat.

The paint protection film they will be using for the vehicles is commonly referred to as a "clear bra". It is one of the most effective ways to protect vehicles from road damages such as stone chips, debris, scratches etc. This non-yellowing film forms an invisible auto bra that can be waxed and maintained, just like paint, to maintain the original high gloss shine of modern vehicles. Clear bra films are typically applied to impact zones on vehicles. This includes parts such as: hoods, fenders, side mirrors, bumpers, grills, rocker panels, headlights covers, floodlights, car door protection, luggage areas, rear bumper decks, roof and A-pillars creating invisible paint protection.