Professionally installed window films offer a variety of benefits depending on the type of film that is installed. 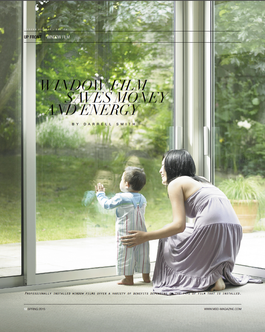 Original article appeared in Modern Builder + Design. Download a copy.
Window film offers many energy-saving benefits for homes being updated. Often when renovations are being done, replacing older single-paned windows with more energy-efficient double or triple-pane windows is a top consideration. However, window replacement can be a costly consideration. In some cases, the owner would like to protect the integrity of the structure by maintaining its original windows.

As long as the single-paned window is structurally sound, adding professionally installed window film makes sense because it may match or exceed the energy efficiency of many modern windows. Having window film installed may cost up to 90 percent less than a complete window replacement. Window film can block 99 percent of ultraviolet rays, and reduce fading of furniture, drapes and flooring.
Professionally installed window films offer a variety of benefits, depending on the type of film that is installed. Window film products are rated by the National Fenestration Rating Council for energy savings just like windows. Across many climate zones, window film has been shown to be one of the most cost-effective energy saving solutions. Return on investment on standard films is far less than that of full window replacements and some utilities offer rebates for window film use.

Window films reflect the sun’s heat in summer, which helps reduce a home’s overall heat gain. Depending on the film applied, it can reduce solar heat gain by as much as 84 percent. Window films also prevent hotspots and other uneven heating throughout the home, providing a uniform level of comfort.

It is said that windows are the eyes to your home’s soul but allowing people to see directly into a home from the outside may not be desirable. Window films can help create privacy. Frosted privacy films are translucent and allow light to pass through while providing 24-hour privacy. Some privacy films provide daytime privacy because they allow occupants to see outside, but prevents others from seeing in. This type of window film can also provide a residence with a uniform look from the outside without the unappealing look of shades and curtains haphazardly open or closed.

Window films can block up to 99 percent of harmful ultraviolet rays. Everyone is aware of sun exposure and skin cancer risks while outside, but few realize that the sun’s damaging rays can also stream into the home through windows, causing potential skin damage to anyone sitting near a window and in direct contact with the sun.

Americans spend billions on anti-aging prevention and remedies that claim to reverse aging. The wise expression, “an ounce of prevention is worth a pound of cure,” may prompt people to rethink how they are living in their homes. Why expose skin and décor to unnecessary UV rays that could lead to premature wrinkles, fading or worse? Window films significantly reduce the negative effects of the sun and allow occupants to safely enjoy more natural sunlight in their homes.

Window film can also help mitigate damage to persons or property from glass fragments whenever glass breaks. When a window breaks, window film may help to hold the fragment pieces together preventing the pieces from traveling either inside or outside the home where it could potential cause harm to people. In summary, professionally installed window films can achieve many of the same energy efficient benefits at a fraction of the cost of window replacement.
About the author:
DARRELL SMITH has over 35 years of experience in the window film industry and is the executive director of the International Window Film Association, a nonprofit organization of window film dealers, distributors, and manufacturers that facilitates the growth of the industry by providing research, influencing policy and promoting consumer awareness of the many benefits of window film. For more information, visit www.ifwa.com.